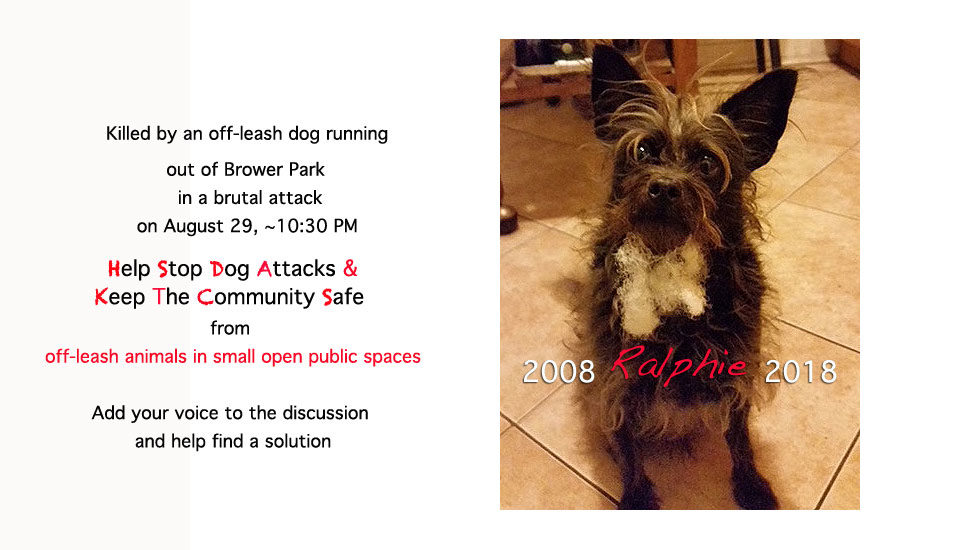 We will share your ideas, not your identity or contact information, with the Community, NYC Parks Management, NYC Elected Officials, the Brooklyn Borough Presidents Office, and Brooklyn Community Board 8.

Friends of Brower Park in partnership with Borough President Eric Adam’s Office will be holding a Community Brainstorming Session on November 27, 2018 at 6PM. It is being generously hosted by the Brooklyn Children’s Museum. Please leave your contact information below so we communicate with you before the Brainstorming Session. Please take the time to fill out the survey at the end of this post to share your thoughts and experiences. We will make them available to the community prior to the November 27th Brainstorming Session by email and on this website.

I am writing this narrative with a very heavy heart: My beloved dog Ralphie was killed by a large, off-leash dog emerging from Brower Park. The trauma of this attack and the subsequent responses of various city agencies in the aftermath of this event have been unacceptable to say the least.

On Wednesday evening, August 29, 2018, at approximately 10:30 PM, I took my two small dogs, Beau and Ralphie out for a walk from my apartment on Park Place opposite Brower Park. As the park is often inundated with off-leash dogs in the evening I purposely walk my dogs on the sidewalks outside the park to avoid any altercations with roaming dogs.

As we walked past the park entrance, located along Park Place near Kingston Avenue, I was alerted to a fast movement and running sound coming from my left, from the direction of Brower Park’s main lawn. I quickly picked up Ralphie to protect him. An off-leash dark colored large dog leapt up and clamped his jaws on Ralphie’s body and my arm. As I screamed, NO NO NO, and attempted to get the dog to release us the owner finally caught up with her dog. The dog ignored her attempts to control him. I directed her to lift the dog’s hind legs; the dog unclenched at some point; the owner leashed the dog, and proceeded to walk simply away. She walked away irrespective of the fact that my dress and undergarments were saturated with blood and that my beloved dog was virtually lifeless.

As a stranger offered to drive us to a local emergency veterinarian, I asked neighbors, who appeared on the scene, to stop the woman. They pursued her but she would not stop. A helpful bystander caught up with the woman and insisted she contact me. Ralphie was pronounced dead on arrival. My dress and undergarments were saturated with his blood. I needed to stand in the shower. The following day, I went to the emergency room, to have my wounds treated. I then went to the 77th Precinct to make a report.

I was subsequently informed by a neighbor that as he saw the attack, he approached police officers in a patrol car parked by the Basketball Court and alerted them to the ongoing attack they refused to intervene. The officers did absolutely nothing, and simply sat in their car both during, and after the attack.

This was the second attack since January by an off-leash dog in Brower Park. In January 2018, at approximately 11a.m. in the morning I was walking both my dogs when, out of the blue, an unleashed dog attacked my dog Ralphie from behind. Then too, the owner retrieved their dog and left the scene without any acknowledgement of Ralphie’s extensive injuries. Ralphie required six months of rehabilitation including three operations at a cost of approximately $16,000. Subsequently, to the attack, I attempted to file a report with the 77th precinct, which refused to take a report because it was a dog-on-dog event. I ultimately made a report to the Parks Committee of Brooklyn Community Board 8.

My neighbors, who live around Brower Park and on the adjacent streets, are horrified by the attacks on Ralphie and worry about their own safety and the safety of their children (many of whom attempt to play in the park, who attend PS289, or who visit the Brooklyn Children’s Museum). They agree that the off-leash dog situation in Brower Park has become extremely dangerous. They are additionally horrified that the dog has been left in the custody of an owner who was unable to manage her dog and left the scene of the crime.Many residents have spoken to me, not only as a concerned dog owner, but in my capacity as the head of Friends of Brower Park, and have repeatedly expressed concern over dog-owners being allowed to have their dogs off-leash in the park all day, into the evening hours, especially after the park is supposed to be closed and in the morning when their children walk to school. Simply put: dog owners do not see signs regarding any “rules” for their dogs in the park (any signs are repeatedly taken down); they believe the park is actually a dog park where dogs can roam free at any time and that loose dogs running out of and throughout the park present no risk to the community. But, unintended consequences of the free-for-all policy have created an unsafe environment that has led to Ralphie’s brutal death.

And there is close to zero enforcement for rules regarding dogs in the park. Confusion, over whether human beings without dogs are allowed in the park after 9PM.

This letter has been difficult to write, it is a mix of profound personal loss and professional outrage. I am a dog owner, a long-term community member and a partner of the NYC Parks Department in my Community Service through the Friends of Brower Park. We need an immediate and direct solution to the dog problem and I hope our Brower Park Community will come together to help us find one. We need clear rules regarding dogs in the park, signs regarding the rules, and enforcement of the rules (along with zero tolerance with respect to a dog owner’s breach of these rules).

Lastly, dogs run into the street from the park. A traffic accident can take human lives as well as the runaway dog’s life. The streets adjacent to Brower Park (Kingston Avenue and Park Place, within running distance from the oval lawn, are well traffic’d and well-used by the community, especially on warm evenings. These last two attacks within an 8 month period underscore the fact that Brower Park, open to residential streets and play areas is not an appropriate location for off-leash animals. There’s too high a risk to Public Safety

Ralphie, was my friend. His soft paw on my cheek woke me up every morning and his late night barks signaled when it was time for us to go to bed. In between he was a brave, smart ten-pound bundle of joy, who tap-danced for treats. The DO NOTHING approach, and imperviousness to reality that I have experienced by law-enforcement from three City Agencies, has taken my little friend’s life. I will never be able to forget the locked jaws and blood, and the killer’s cold eyes as Ralphie was crushed in my arms.

Policy must change before another dog, or a child, or an adult is attacked and potentially killed: Before a off-leash dog causes a traffic accident by  running out of  Brower Park into the street:

Thank you for taking the time to hear of my loss and grief. I hope we can work together to take needed steps to prevent future fatalities. You may agree or disagree with the 9 changes I’ve listed. Please use the form below not only to participate in the conversation but to help find a solution. Tell us what you think and know.

Since the Police Precinct does not take reports on dog-on-dog/animal attacks we don’t know how often they occur or how serious they are. We need your input to help us to better understand the issues.

There are many community members, like myself, who are avoiding walking their dogs in Brower Park because of the fear of aggression by another dog.

Take this opportunity to speak out and inform the discussion. Help us quantify incidents. We will not share your contact information or identity with anyone. What we will do is send you an invitation to the upcoming Community Brainstorming Session.

To learn about general Dog policy in NYC Parks read the Dogs in NYC Parks then read how the NYC Parks Department has applied these rules to Brower Park.