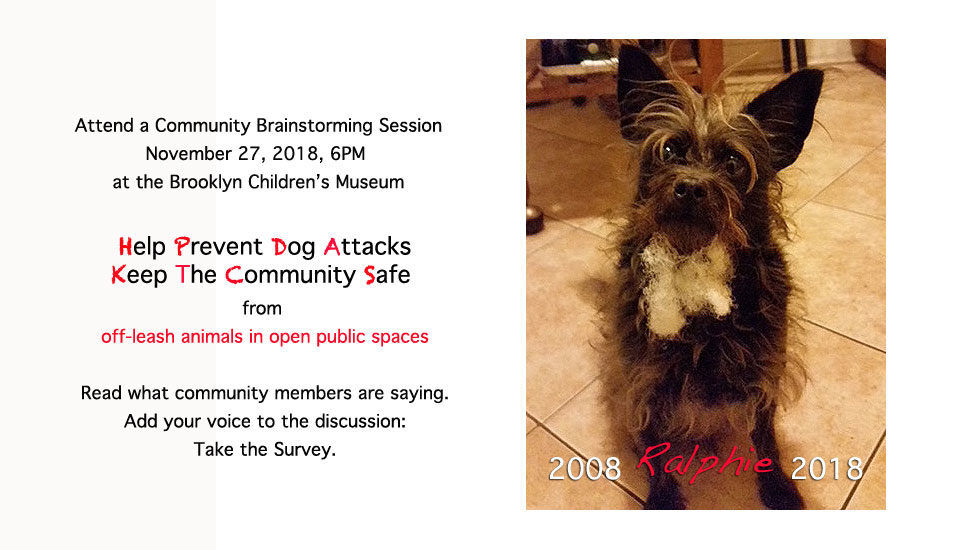 Dog Policy in Brower Park–Does it provide a safe environment for people and dogs? How do we prevent another loved pet, a child, or a random park visitor, from being hurt? How do we make visiting Brower Park a pleasurable experience for everyone in the community?

We will share your ideas, not your identity or contact information, with the Community including the  NYC Parks Management, NYC Elected Officials, the Brooklyn Borough Presidents Office, and Brooklyn Community Board 8.

Friends of Brower Park with Borough President Eric Adam’s Office will be holding a Community Brainstorming Session on November 27, 2018 at 6PM. It is being generously hosted by the Brooklyn Children’s Museum.

Please leave your contact information so we may communicate with you before the Brainstorming Session. More importantly, take the time to fill out the survey, share your ideas and experiences.

Survey information is now available following the Survey form on this page. The data will be updated as it is received. If you have not filled out the survey please do so now.

I’m sharing my experiences by telling Ralphie’s story along with ideas that may help prevent the next tragedy. Please share your ideas and experiences and by doing so help determine the right Dog Policy for Brower Park and the Brower Park Community.

My beloved dog Ralphie was killed by a large, off-leash dog emerging from Brower Park. The trauma of this attack has left me with nightmares and images I can’t stop from replaying. I no longer feel safe walking my dog Beau in or near Brower Park nor do I cross the street when a large dog appears.On Wednesday evening, August 29, 2018, at approximately 10:30 PM, I took my two small dogs, Beau and Ralphie out for a walk from my apartment on Park Place opposite Brower Park. As the park is often inundated with off-leash dogs in the evening I purposely walk my dogs on the sidewalks outside the park to avoid any altercations with roaming dogs.

As we walked past the park entrance, located along Park Place near Kingston Avenue, I was alerted to a fast movement and running sound coming from my left, from the direction of Brower Park’s main lawn. I quickly picked up Ralphie to protect him. A large off-leash dark brindle dog leapt up and clamped his jaws on Ralphie’s body and my arm. As I screamed, NO NO NO, and attempted to get the dog to release us the owner finally caught up with her dog. The dog ignored her attempts to control him. I directed her to lift the dog’s hind legs; the dog unclenched at some point; the owner leashed the dog, and proceeded to walk simply away. She walked away irrespective of the fact that my dress and undergarments were saturated with blood and that my beloved dog was virtually lifeless.

As a stranger offered to drive us to a local emergency veterinarian, I asked neighbors, who appeared on the scene, to stop the woman. They pursued her but she would not stop. A helpful bystander caught up with the woman and insisted she contact me. Ralphie was pronounced dead on arrival. My dress and undergarments were saturated with his blood. As I removed my bloody garments in the shower the outline of my dress, drawn in Ralphie’s blood covered my body. The following day, I went to the emergency room, to have my wounds treated. I then went to the 77th Precinct to make a report.

I was subsequently informed by a neighbor that as he saw the attack, he approached police officers in a patrol car parked by the Basketball Court and alerted them to the ongoing attack they refused to intervene. The officers did absolutely nothing, and simply sat in their car both during, and after the attack.

In January 2018, at approximately 11a.m. in the morning I was walking both my dogs when, out of the blue, an unleashed dog attacked my dog Ralphie from behind. Then too, the owner retrieved her dog and left the scene without any acknowledgement of Ralphie’s extensive injuries. Ralphie required six months of rehabilitation including three operations at a cost of approximately $16,000. Subsequently, to the attack, I attempted to file a report with the 77th precinct, which refused to take a report because it was a dog-on-dog event. I ultimately made a report to the Parks Committee of Brooklyn Community Board 8. I paid this bill from my retirement fund.

This is a painful story to tell. It represents a mix of profound personal loss and civic outrage. I am a dog owner, and nature lover, a long-term community member and a volunteer to the NYC Parks Department in my volunteer capacity as the Chairperson of the Friends of Brower Park. Ralphie died brutally because of what I consider inappropriate dog policy for Brower Park. We need an immediate alternative to the current off-leash dog policy that endangers humans and their pets. I hope our Brower Park Community by coming together will find a reasonable alternative that allows all of the community to enjoy Brower Park. The status quo creates too high a risk to Public and Dog Safety and limits park enjoyment.

There are many community members, like myself, who are avoiding walking their dogs in Brower Park:

Listed are change ideas for Dog Policy. Please take this opportunity to add your own to the survey.

To learn about general Dog policy in NYC Parks read the Dogs in NYC Parks then read how the NYC Parks Department has applied these rules to Brower Park.